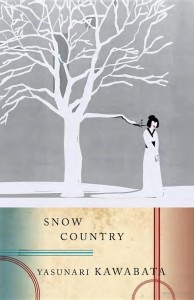 This book, Snow Country (雪国 in original) is one of the masterpieces of the first Japanese who won the Nobel Prize for Literature (1968), Yasunari Kawabata (川端康成). Snow Country describes the love affair between a rich Tokyo man and a provincial geisha somewhere in the mountains of northern Japan. It is said to be Yuzawa in Niigata prefecture, supported by the fact that Kawabata wrote the initial version of it in Yuzawa. Furthermore, Yuzawa is also known for one of the highest snow fall rate in Japan.

Famous for his rich and poetic language, Kawabata develops the story around the interplay between the roughness of the outside worlds, and the strange relation between the two, both cheating themselves with believe in something more than it is. And although there is no action, no suspense, the book carries the reader through the pages with a sequence of wonderful images and associations that never leaves us bored.

The English version I read is from 1956 by Edward Seidensticker, and provides an interesting reading, very different from more mainstream English translations. I cannot say whether Seidensticker tried to convey the feeling and beauty of the original Japanese, but in my opinion the translation, although feeling a bit out of time English, is perfectly suited to the book.

Now I only need to improve my Japanese to the level that I can read and appreciate 雪国 in original.

What a nice garden, would be even nice with a bit of sun