Talks have been finished, and as a special present to the participants, Pavneet has organized an excursion that probably was one of the best I ever had. First we visited the Toronto Reference Library where we were treated to a delicious collection of rare books (not to mention all the other books and architecture), and then a trip through the Ismaili Centre Toronto and the Aga Khan Museum. 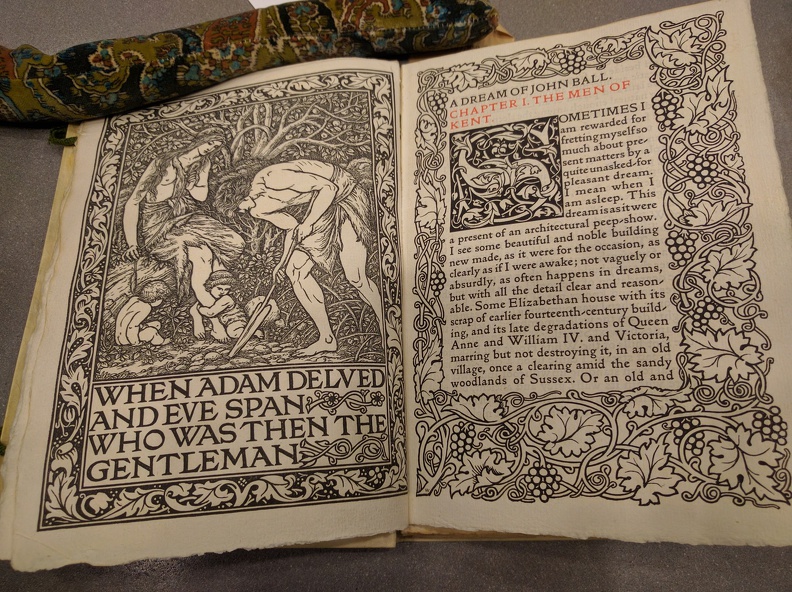 (Kelmscott press edition from 1892 of William Morris’ A Dream of John Ball.) All these places were great pieces of architecture with excellent samples of the writing and printing art. And after all that and not to be mentioned, the conference dinner evening cruise!

Our first stop was the Toronto Reference Library. Designed by Raymond Moriyama, it features a large open atrium with skylights, and it gives the library an open and welcoming feeling. We were told that it resembles a tea cup that needs to be filled – with knowledge. 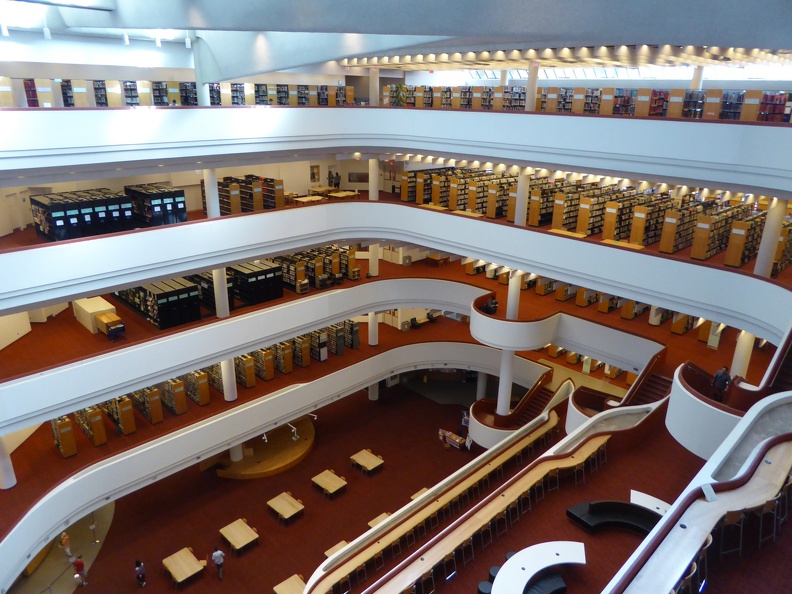 The library also features running water at several places – the architect had the idea that natural ambient noise is more natural for a library than the eclectic silence that anyway never happens. Originally there were lots of greens hanging down into the Atrium, resembling the Hanging Gardens, but they have been scrapped due to financial reasons. But there are still green oasis like this beautiful green wall in a corner of the library. 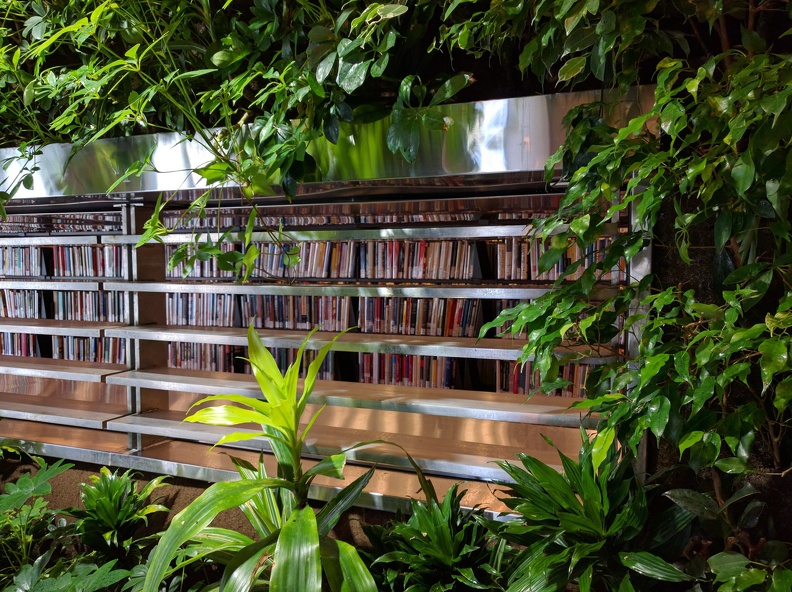 We were guided first to the fifth floor where the special collection is housed. And what a special collection. The librarian in charge has laid out about 20 exquisite books starting from early illuminated manuscripts over incunabula to high pieces of printing art from the 18th and 19th century. Here we have a illuminated script in Carolingian minuscule. 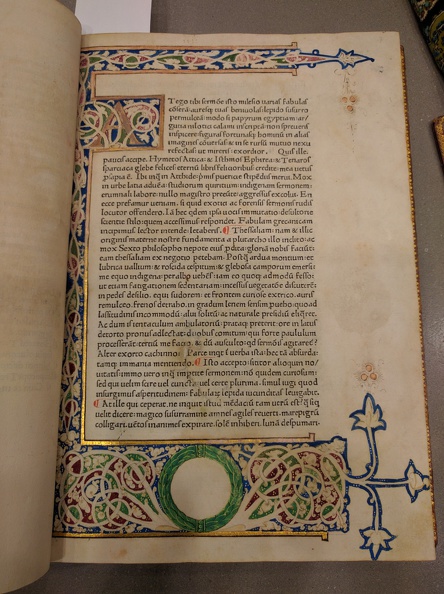 What was really surprising for all of us in this special collection that all these books were simply laid out in front of us, that the librarian touched and used it without gloves, and above all, that he told us that if one wants it is common practice to check out these books for study sessions and enjoy them on the spot in the reading room. I don’t know any other library that allows you to actually handle these rare and beauty specimens!

The library not only featured lots of great books, it also had some art installation like these light rods. 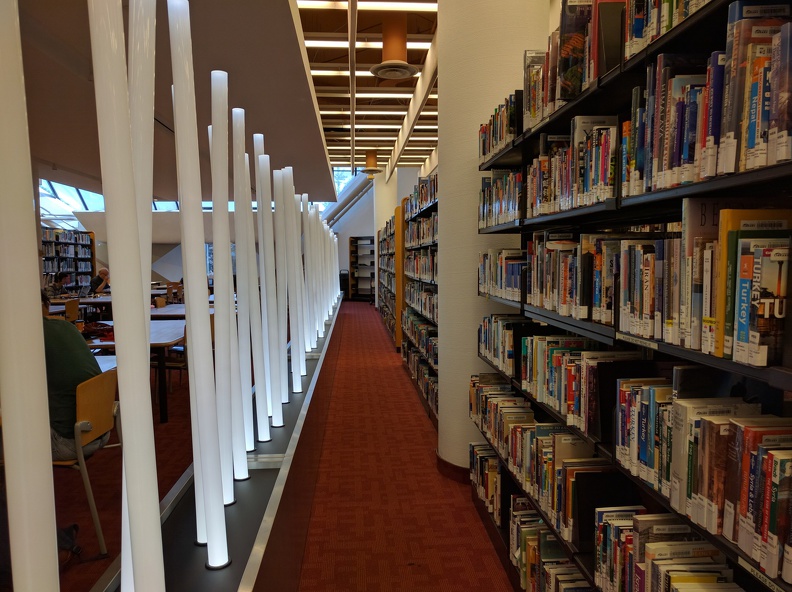 In one of the books I found by chance a map of my hometown of Vienna. Looking at this map from very old times, the place where I grew up is still uninhabited somewhere in the far upper right corner of the map. Times have changed. 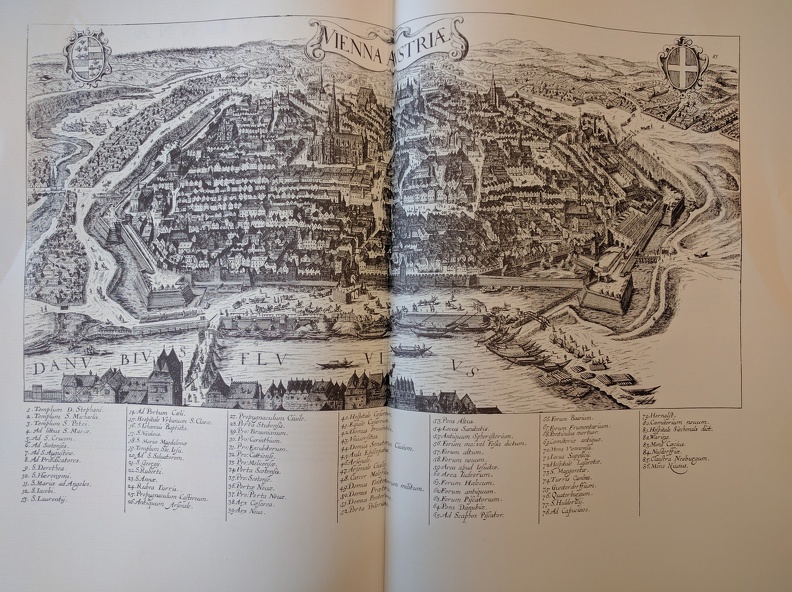 After we left this open and welcoming treasure house of beautiful books, we moved to the Aga Khan Museum and Ismaili Centre Toronto, which are standing face-to-face separated by some water ponds in the Aga Khan park a bit outside of central Toronto. Here we see the Ismaili Centre from the Aga Khan Museum entrance. The big glass dome is the central prayer room, and is illuminated at night. Just one detail – one can see in the outer wall one part that looks like glass, too. This is the prayer alcove in the back of the prayer hall, and is made from huge slabs of Onyx that are also lit up in the night. 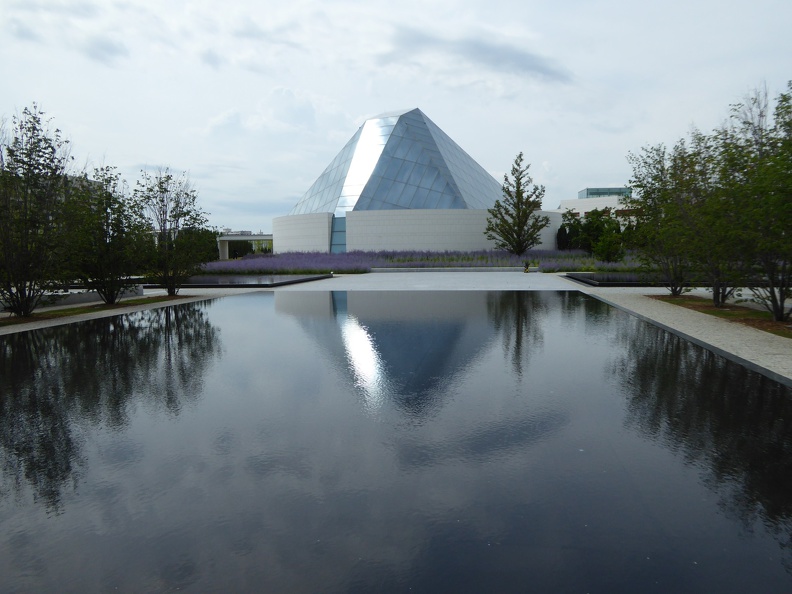 The Ismaili Centre, designed by Charles Correa combines modern functional and simple style with the wonderful ornamental art of the Islam heritage. The inside of the Ismaili Centre features many pieces of exquisite art – calligraphy, murals, stone work, etc – here is a medallion made from precious stone and set onto a hand-carved wall. 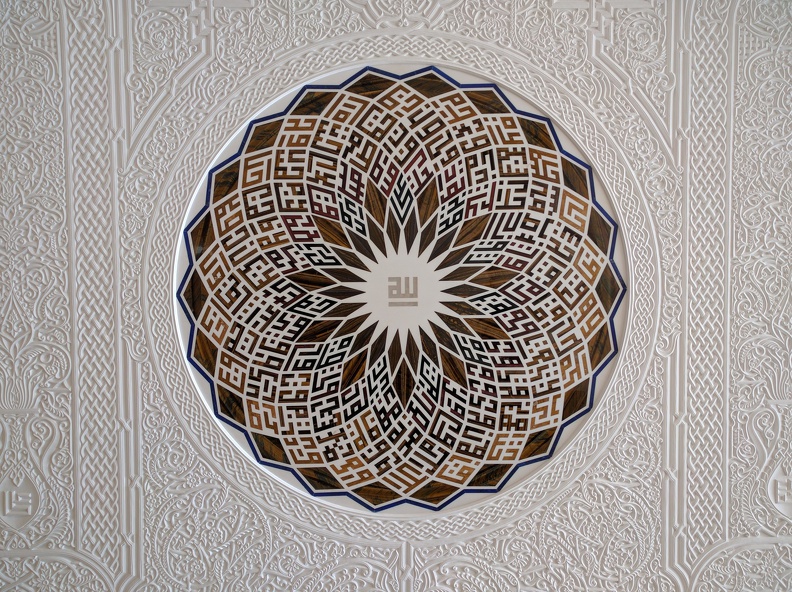 A calligraphy on the wall in the Ismaili Centre 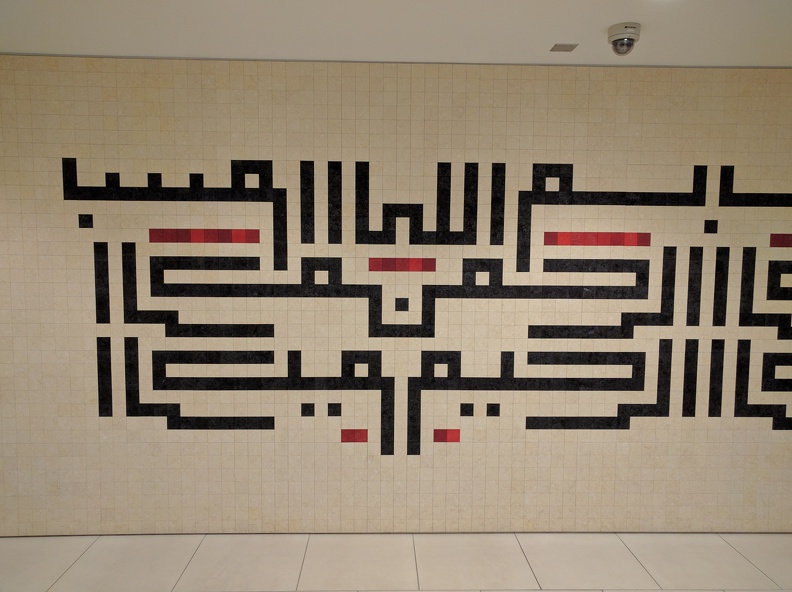 Following the Ismaili Centre we turned to the Aga Khan museum which documents Islamic art, science, and history with an extensive collection. We didn’t have much time, and in addition I had to do some fire-fighting over the phone, but the short trip through the permanent collection with samples of excellent calligraphy was amazing. 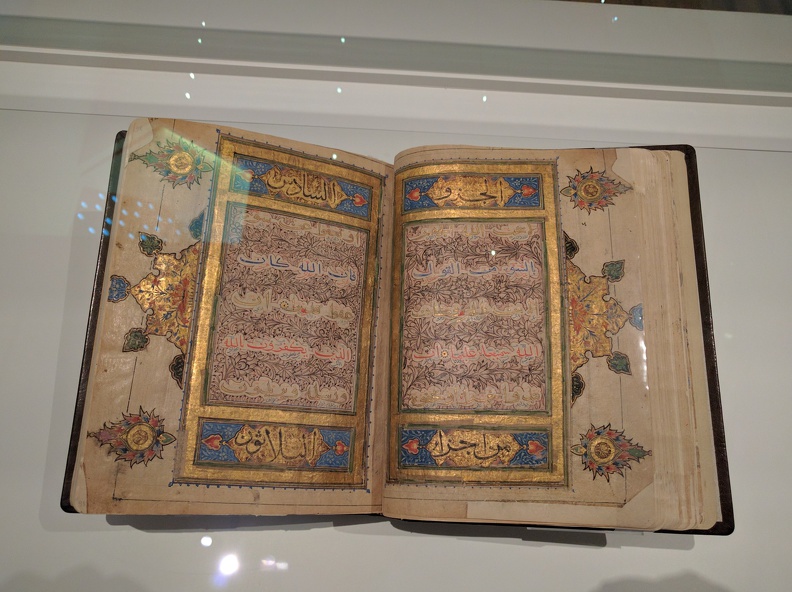 After returning from this lovely excursion and a short break, we set off for the last stop for tonight, the dinner cruise. After a short bus ride we could board our ship and off we go. Although the beer selection was not on par with what we are used from carft breweries, the perfectly sized boat with two decks and lots of places to hang around invited us to many discussions and chitchats. And finally I could enjoy also the skyline of Toronto. 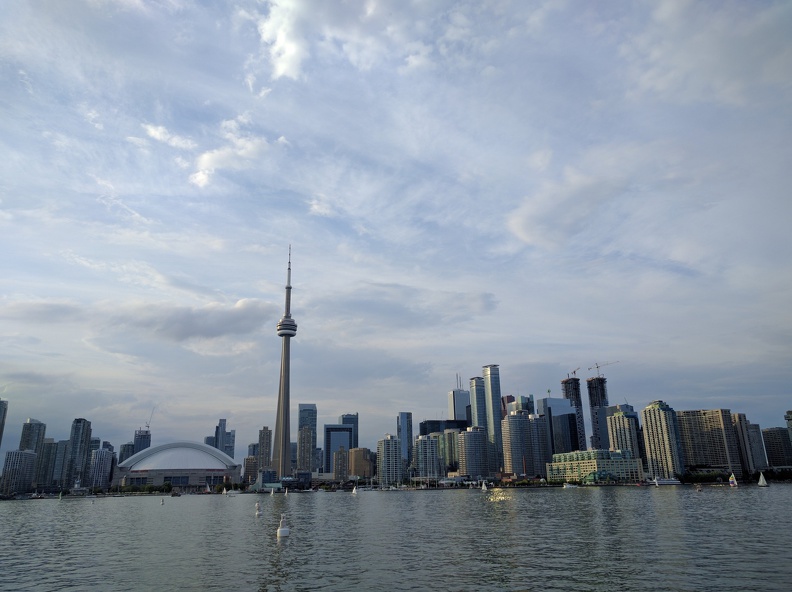 After the dinner we had some sweets, one of which was a specially made cake with the TUG 2016 logo on it. I have to say, it was not only this cake but the whole excellent and overboarding food we had during all these days, that will make me go on diet when I am back in Japan. Pavneet organized for the lunch breaks three different style of kitchens (Thai, Indian, Italian), then the excursions to local brewers and and and… If it wouldn’t be for TeX, I would call it a “Mastkur”. 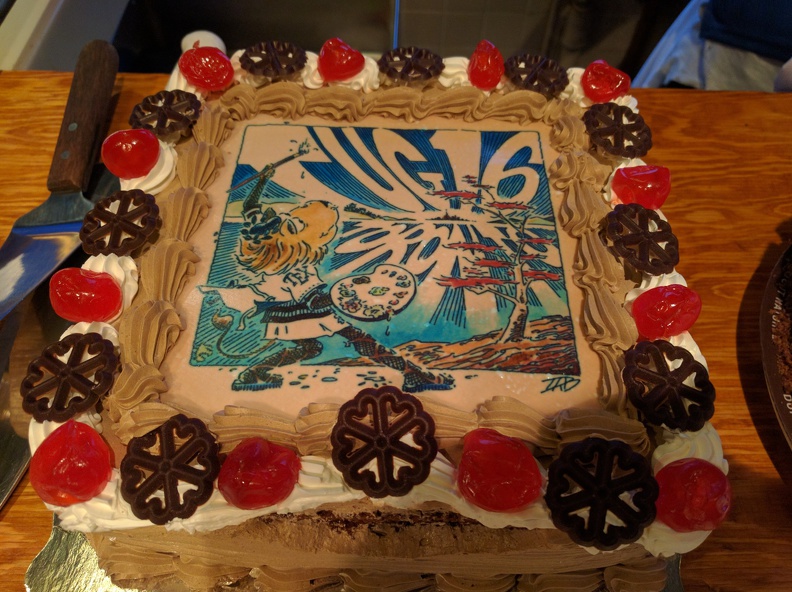 During the cruise we also had a little ceremony thanking Jim for his work as president of the TUG, but above all Pavneet for this incredible well organized conference. I think everyone agreed that this was the best TUG conference since long. 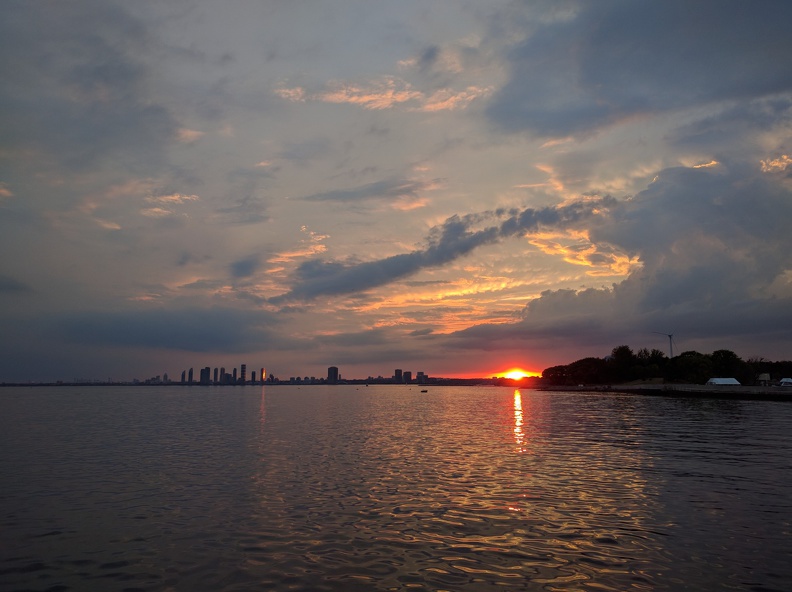 During the ceremony, Pavneet also announced the winners of the TUG 2016 fountain pen auction. These pens have a long history/travel behind them, see details on the linked page, and were presented to the special guests of the conference. Two remaining pens were auctioned with funds going to the TUG. The first one was handed over to Steve Grathwohl, and – to my utter surprise – the second one to myself. So now I am a happy owner of a TUG 2016 fountain pen. What a special feature!

Just one more detail about these pens: They are traditional style, so without ink capsules, but one needs to insert the ink with a syringe. I guess I need to stack up a bit at home, and more importantly, train my really ugly hand-writing, otherwise it would be a shame to use this exquisite tool.

We returned to the harbor around 10pm, and back to the hotel, where there was much greeting and thanking, as many people will return the following day. 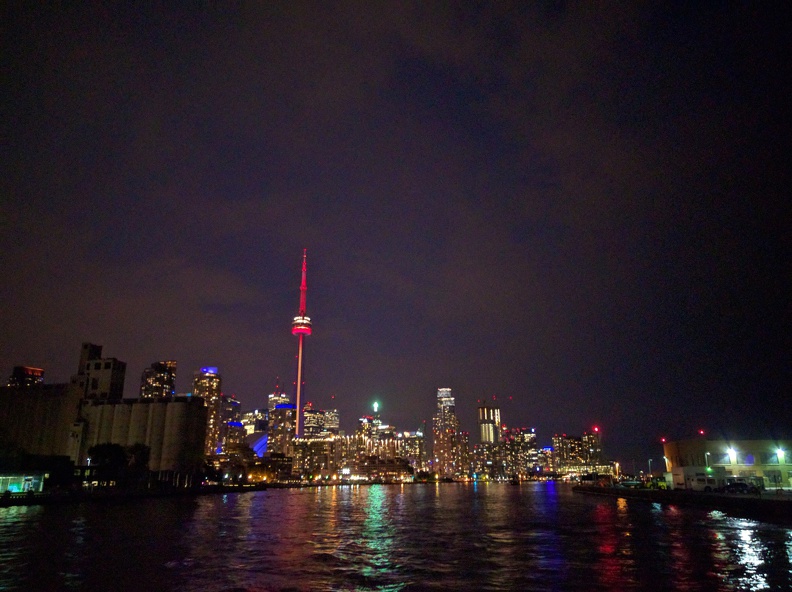 I will also leave on Friday morning to meet with friends, thus I will not be participating in (and not reporting on) the last excursion of the TUG 2016. I will leave Toronto and the TUG 2016 with (nearly) exclusively good memories of excellent talks, great presentations, wonderful excursions, and lots of things I have learned. I hope to see all of the participants on next year’s TUG meeting – and I hope I will be able to attend it.

Thanks a lot to Pavneet, you have done an incredible job. And last but not least, thanks to your lovely wife for letting you do all this, I know how much time we did steal from her.

A few more photos can be found at the album Day 4 – Books, ooh books.