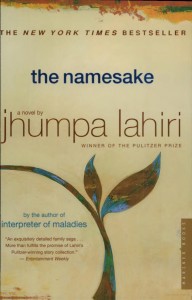 Another book that I bought inspired by the NPR’s Book Concierge for 2013 is Jhumpa Lahiri’s The Namesake. It is the first novel of the Indian American author Jhumpa Lahiri. In 2010 she won the Pulitzer Prize for Fiction for her collection of short stories Interpreter of Maladies (1999). Her first novel The Namesake is the story of a Bengali (Indian) couple that has moved to the US, settles and brings up their children there, and struggles with the cultural, social, and emotional differences between the old and the new home. In 2006, the book was also made into a movie. The title comes from the naming of the oldest son of the couple, which by a serious of unfortunate coincidences is registered with his pet name Gogol, named after the Russian-Ukrainian author Nikolai Gogol. And as much as he, the son, is fighting with his name, eventually changing it to a new name, the whole family is fighting with the problem of being somehow culturally uprooted after a move to a different culture. And while over time his old name is disappearing more and more, it always remains with the son, as well as the roots are not completely cut for the whole family.

It is a calm book, without action, without pretentions, telling a story of deep feelings and severe disorientation of Indian immigrants. For those who have lived abroad for a long time in a very different culture, these feelings and contemplation will resound many of their own experiences, as it did for me.