Having recently switched from NVIDIA to AMD graphic cards, in particular a RX 5700, I found out that I can get myself a free upgrade to the RX 5700 XT variant without paying one Yen, by simply flashing a compatible 5700 XT BIOS onto the 5700 card. Not that this is something new, a detailed explanation can be found here. 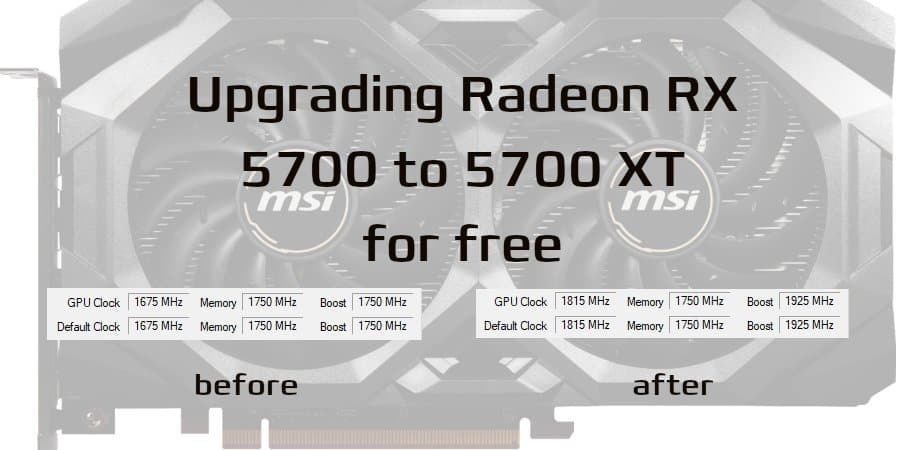 The same article also gives a detailed technical explanation on the difference between the two cards. The 5700 variant has less stream processors (2304 against 2560 in the XT variant), and lower power limits and clock speeds. Other than this they are based on the exact same chip layout (Navi 10), and with the same amount and type of memory—8 GB GDDR6.

Flashing the XT BIOS onto the plain 5700 will not changes the number of stream processors, but power limits and clock speeds are raised to the same level of the 5700 XT, providing approximately a 7% gain without any over-clocking and over-powering, and potentially more by raising voltage etc. Detailed numbers can be found in the linked article above. 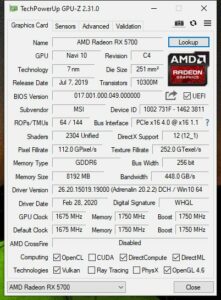 The first step in this “free upgrade” is to identify ones own card correctly, best with device id and subsystem id, and then find the correct BIOS. Lots of BIOS dumps are provided in the BIOS database (link already restricting to 5700 XT BIOS). I used CPU-Z (Windows program) to determine this items, see image on the right (click to enlarge). In my case I got 1002 731F - 1462 3811 for the complete device id. The card is a MSI RX 5700 8 GB Mech OC, so I found the following alternative BIOS for MSI RX 5700 XT 8 GB Mech OC. Unfortunately, it seems that MSI is distinguishing 5700 and 5700 XT by their device id, because the XT variant gives 1002 731F - 1462 3810 for the complete device id, meaning that the last digit is 1 off compared to mine (3811 versus 3810). And indeed, trying to flash this video BIOS the normal way (using the Windows version ended in a warning that the subsystem id is different. A bit of search led to a thread in the TechPowerup Fora and this post explaining how to force the flashing in this case.

Disclaimer: The following might brick your graphic card, you are doing this on your own risk!

I did all the flashing and checking under Windows, but only because I realized too late that there is a fully uptodate flashing program for Linux that exhibits the same functionality. Also, I didn’t know how to get the device id since the current AMD ROCm tools seem not to provide this data. If you are lucky and the device ids for your card are the same for both 5700 and 5700 XT variants, then you can use the graphical client (amdvbflashWin.exe), but if there is a difference, the command line is necessary. After unpacking the AMD Flash program and getting the correct BIOS rom file, the steps taken on Windows are (the very same steps can be taken on Linux):

This should succeed in both cases. After that shutdown and restart your computer and you should be greeted with a RT 5700 XT card, without twisting a single screw. Starting Windows for the first time gave some flickering, because the driver for the “new” card was installed. On Linux the system auto-detects the card and everything works out of the box. Very smooth.

Finally, a word of warning: Don’t do these kind of things if you are not ready to pay the prize of a bricked GPU card in case something goes wrong! Everything is on your own risk!

Let me close with a before/after image, most of the fields are identical, but the default/gpu clocks both at normal as well as boost levels see a considerable improvement 😉 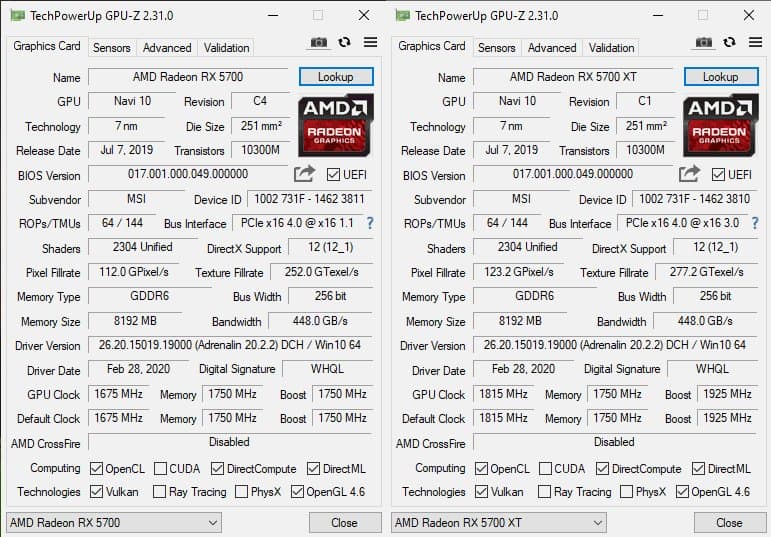