Get the Champagne ready, we have released the final images of TeX Live 2020. 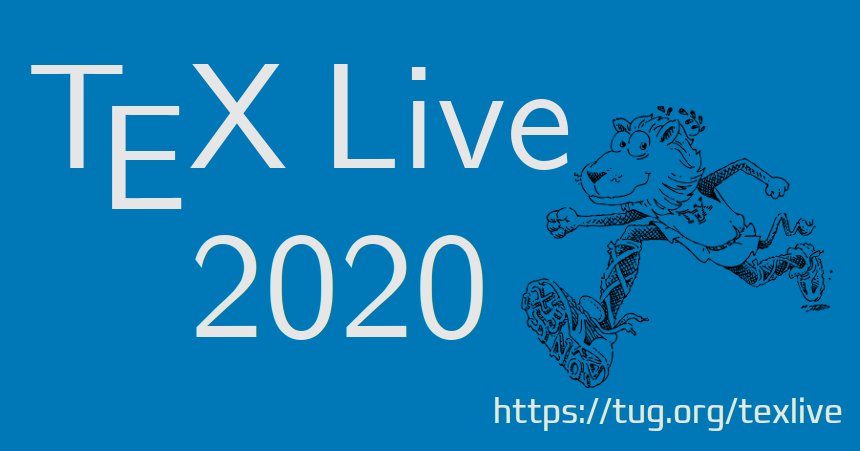 Due to COVID-19, DVD production will be delayed, but we have decided to release the current image and update the net installer. The .iso image is available on CTAN, and the net installer will pull all the newest stuff. Currently we are working on getting those packages updated during the freeze to the newest level in TeX Live.

Before providing the full list of changes, here a few things I would like to pick out:

Most of the above features have been available already either via tlpretest or via regular updates, but are now fully released on the DVD version.

Thanks goes to all the developers, builders, the great CTAN team, and everyone who has contributed to this release!

Finally, here are the changes as listed in the master TeX Live documentation:

pdfTeX: New primitive \pdfmajorversion; this merely changes the version number in the PDF output; it has no eﬀect on any PDF content. \pdfximage and similar now search for image ﬁles in the same way as \openin.

MacTeX: MacTeX and x86_64-darwin now require 10.13 or higher (High Sierra, Mojave, and Catalina); x86_64-darwinlegacy supports 10.6 and newer. MacTeX is notarized and command line programs have hardened runtimes, as now required by Apple for install packages. BibDesk and TeX Live Utility are not in MacTeX because they are not notarized, but a README ﬁle lists urls where they can be obtained.

That’s all, let the fun begin! And again, thanks to all the developers, builders, the great CTAN team, and everyone who has contributed to this release!